Intel-ligent Computers – on a stick! 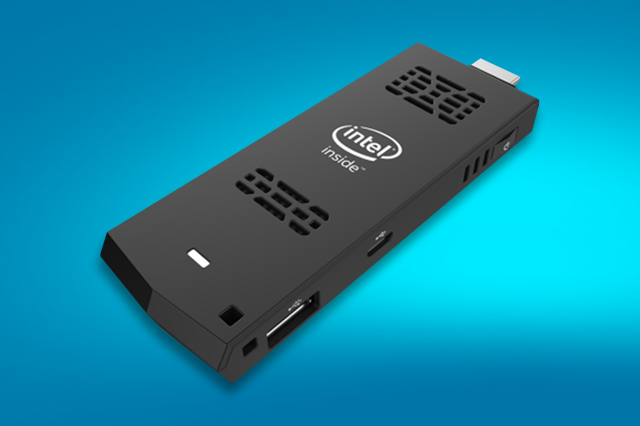 If you have seen Jeff Dunham – then you know this reference. If not – I recommend this search “Jeff Dunham on a stick”

Anyway, this is a review of a device I have been using for some time now. Intel recently made public, a little device called the Compute Stick.

If one were to judge the book by it’s cover, then you would think that this device came from the nether regions of the cheap electronics market and probably ran Android 2.0 or something. But, it isn’t. It is a well built device that runs a powerful Intel Atom processor – quad-core no less.

It has 32 GB of on board storage – which is plenty to run the latest version of Windows, and leave some change to install some additional software. It has a USB 2.0 slot that you should use to connect with a remote keyboard/mouse combo or an external HDD if you have a keyboard/mouse that connects via Bluetooth.

Power is via a Micro USB – the kind that probably powers your HTC or Samsung or whatever android phone you have running. There is also a Micro SD slot on the side to increase the storage by 128 GB.

This device plugs straight into your TV’s HDMI port and converts it into a fully functional windows computer.

Powers up in a jiffy

IT IS THAT POWERFUL.

There, I have run out of spec to write about, so let me talk a little about the experience of using this device.

Once it was out of the box, setting it up was far easier than, say, a chrome cast – imagine you were setting up your laptop – well this is EXACTLY like that. Simple, walk through, self-explanatory. Once booted up – which by the way thanks to Flash memory is super fast -the interface was comforting and known, a la Windows 8.1. The upgrade to Windows 10 was slightly long drawn but worth it. Boot up is now half the time. I used a HDMI extender to reduce the chance of damage for whatever cause and it is recommended. Sticking out the way it does, it is far more likely to get hurt if the TV keeled over backwards, in the event that it SHOULD keel over. 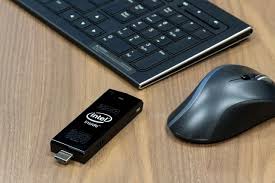 This is not the keyboard mouse combo I got, but this is not a bad combination either.

I also got a fantastic Microsoft Keyboard/Mouse combo device to use with the Intel Stick which my wife loves and won’t use her own laptop at home, anymore – this is far more fun.

We used to have a Chrome cast which performed screen-casting duties from a Windows device – but now with this plugged in firmly into my TV, I find no use for the Chrome cast. My home laptop is also redundant. The device connects easily to the home WiFi and all Network Storages, allowing me to stream all my video and audio without having to worry about which program and all that (thanks for that Chrome cast – not enough apps to play from the network) – it was like being home.

All in all, convert your old TV into a smart screen using the Intel Compute Stick and you will not regret this decision.