Sports for the gamer dude!

Since I have arrived in Dubai, the one thing that I have been re-introduced to (and I missed doing), is console gaming. I recently got my hands on a copy of EA’s FIFA 2011 for the DS. 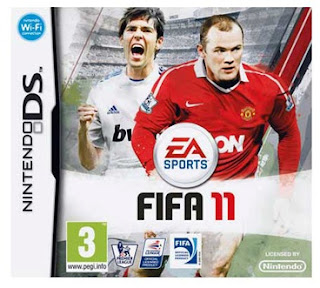 The loading screen for the game is the same as the PS2, but faster. The game play is easy to pick up if you are playing it for the first time. The quality of graphics is decent. Its clean and despite having a small screen the DS renders the images rather sharply and there is no strain on the eyes. Having briefly tried a previous version of FIFA on the older PSP, I find that the DS has infinitely better graphics.

Back to the game! Cut scenes leave a lot to be desired, but in the actual game, the AI is getting tougher to beat with every new release. With tougher computer players to beat, the game is great fun to play, and the contentment of beating the AI is great.

There are the standard game play options of Manager Mode – where you become the manager of either a team that you create or you lead an existing team to victory through many tournaments. All the possible leagues and teams from across the world are covered – with names, game play styles and everything! If you have a DSi or the DS XL, then you could use the in-built camera to create a single pro player in your own image. You could use wifi connectivity to create multi-player environments within your network of friends who have a DS and the game. There are many mini games as well that use the touch functionality of the DS really well and are a lot of fun to play.

These mini games also reflect the game play technique used in the main game. Free Kicks near the goal, Penalties and Dribbling skills are tested in each of the mini games across 5 mini games.

Great game play and of course managing your own team where you could have your face as one of the key players is all great incentive to own this game on a DS and play it. I know I would.

Here is the Official FIFA 2011 Trailer:

Of course the trailer was for the Sony PS3, but the game AI on the DS is similar to the PS.

I would rate this game as follows:

*The opinions expressed in this blog post are mine and mine alone. I do not wish to impose my opinion on anyone and I implore you to try the game despite my review.

For Bouquets and Brickbats, please email me at partha@parthasrinivasan.com
Partha Srinivasan, Publicity Consultant